Ever since Artur Schnabel was laid to rest in 1951 the grave has attracted many visitors, mostly musicians whose life had been touched by Artur’s music.  Since then four more musicians of the Schnabel family have found their final resting place, each an outstanding musician, each having had a lasting impact on his or her environment.

On this page you, our visitor will learn a few facts about the grave and about the community in which it is located.

In the summer of 1951 Artur Schnabel and his wife, Therese Schnabel, were spending time in Axenstein, a hamlet above Lake Lucerne a couple of miles south of Brunnen.  Due to heart problems Artur Schnabel had to stay below the altitude of  Sils Maria in the Engadin, Switzerland, away from the Alps he so loved.

The male nurse, a native of the area described to Artur the Mythen, a mountain range close by, and how peaceful Schwyz, his home town is.  Through these stories Artur fell in love with the area and expressed the wish to be buried in Schwyz.

Schwyz is in the heart of Switzerland close to Lake Lucerne.  Its coordinates are about 47.02 N/8.65 E.  The town is the capital of the Canton Schwyz, and has a population of about 14,300 (estimate 2012).  The Canton Schwyz was one of the original founding areas of Switzerland in 1291.  The town has a museum that displays many treasures of the rich history of the community.  The town library, located in the same building houses a Schnabel collection of some publications of the Schnabel Music Foundation. 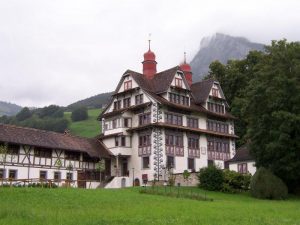 The Ital von Reding House houses a museum, library, and meeting halls. It dates from the early 1600s.

The family grave is located on the northern edge of the cemetery of Schwyz. Since 2006 the town of Schwyz has declared the grave a monument to be cared for by the town in perpetuity. This exempts the site from the common practice of removing the remains after a period of a ten to twenty years to free up the grave site.

A PDF guide to find the grave can be found here.